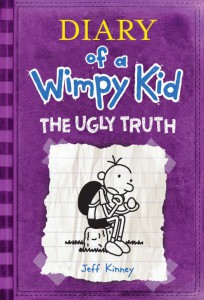 School is out and the results are in on Scholastic's bestselling books for the 2010-2011 school year. Read on for the top-five in picture books, transitional reading, early chapter books, chapter books, middle grade, young adult and non-fiction.

School is out and the results are in on Scholastic’s bestselling books for the 2010-2011 school year. The list is based on purchases made through Scholastic’s US network of in-school book clubs. Read on for the top-five in picture books, transitional reading, early chapter books, chapter books, middle grade, young adult and non-fiction.

1. If You Give a Pig a Party by Laura Numeroff
2. The Kissing Hand by Audrey Penn
3. There Was an Old Lady Who Swallowed Some Leaves! by Lucille Colandro
4. Snowmen at Night by Caralyn Buehner
5. Llama Llama Misses Mama by Anna Dewdney

The top-five books for transitional readers:

1. Diary of a Wimpy Kid: The Ugly Truth by Jeff Kinney
2. The Adventures of Ook and Gluk, Kung-Fu Cavemen from the Future by Dav Pilkey
3. Beezus and Ramona by Beverly Cleary
4. The Best Christmas Pageant Ever by Barbara Robinson
5. Charlotte’s Web by E.B. White

1. The Heroes of Olympus, Book One: The Lost Hero by Rick Riordan
2. Percy Jackson & the Olympians, Book Five: The Last Olympian by Rick Riordan
3. The Kane Chronicles: The Red Pyramid by Rick Riordan
4. The Kind of Friends We Used to Be by Frances O’Roark Dowell
5. Mockingbird by Kathryn Erskine

The top-five in non-fiction: