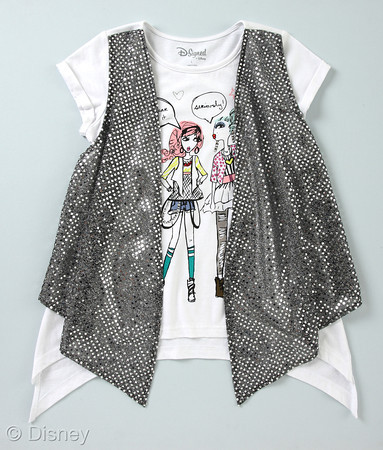 Disney Consumer Products has released the first merchandising program based on the Disney Channel comedy series Shake It Up, which launched in 2010.

Disney Consumer Products has released the first merchandising program based on the Disney Channel comedy series Shake It Up, which launched in 2010.

The new merchandise program for tweens plays up the series’ dancing theme and features a collaboration with Mattel and fashion collections at Target, K-Mart, Sears, Payless, JCPenney, Kohl’s and Macy’s.

Target fashion line D-Signed will debut an apparel line (pictured) inspired by the characters’ looks and personalities this August. Come the holidays, Disney and Mattel will launch a line of Shake It Up dolls inspired by lead characters CeCe and Rocky as part of its new Disney VIP Doll collection. The VIP dolls will retail for US$16.99, with each doll unlocking VIP access to online content (launching July 15), where girls can enhance their connection to the characters through activities.

Shake It Up products will debut at Payless for the first time this fall with five different styles of footwear – ranging from combat boots to sneakers and ballet flats. And, kicking things off on July 15, Shake It Up-related separates and t-shirts will be available at all Kmart stores. Sleepwear and accessories will be joining the mix this holiday season.

An additional product line with dancewear company Capezio is in development for spring 2012.