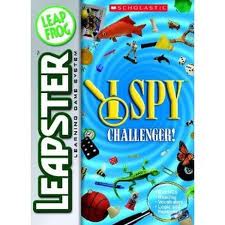 I Spy Super Challenger, aimed at kids ages five to nine, will be available at retail in September for US$24.99.

The game combines I Spy’s photographs and riddles with arcade style games and will engage players in seek and find play.

The previously released games, I Spy Challenger (pictured) and I Spy Treasure Hunt, have collectively sold more than one million units to date.

Since the first I Spy book, written by Jean Marzollo with photographs from Walter Wick, was published by Scholastic in 1991, the program has expanded to include 42 million books in print. The franchise now includes a television series that airs on HBO Family in the US and has been sold in more than 30 countries worldwide.