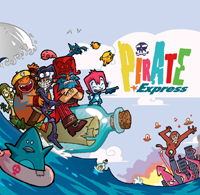 Canada's Teletoon has given the go ahead for development of Atomic Cartoons' Pirate Express.

Canada’s Teletoon has given the go ahead for development of Atomic Cartoons’ Pirate Express.

A co-production with France’s Ellipsanime, the 52 x 11-minute series follows an adventurous 12-year-old Atlantean boy named Newt who has been given the challenging task of leading a motley crew of unruly pirates on bizarre voyages. The series is slated for a March 2012 delivery.