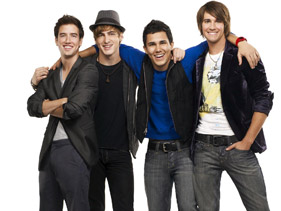 Nickelodeon has ordered up a third season of the live-action comedy Big Time Rush, with 20 new episodes starting production in January 2012.

Nickelodeon has ordered up a third season of the live-action comedy Big Time Rush.

The series, created by Scott Fellows and produced in partnership with Sony Music, follows the adventures and misadventures of four best friends from Minnesota who move to L.A. and trade in their hockey sticks and parkas for a chance at music stardom.  A full 20 new episodes will go in production starting January 2012.

In the meantime, Nickelodeon is set to premiere the music video for Big Time Rush’s new single “Worldwide” from group’s debut album BTR (Columbia Records) on June 18.  The group will also embark on a US and European tour this summer and will head back into the studio to record their second full-length album due out later this year.

Currently in its second season, the series averages 3.9 million total viewers per episode.