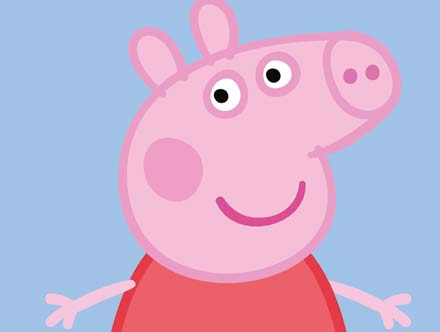 The deals were sparked at last month’s MIPTV in Cannes, France.

Season four of Peppa Pig (pictured) has been snapped up by WDR (Germany), RTV (Slovenia), TV Catalunya (Spain) and RTE (Ireland), with WDR and RTV also picking up season three.  In terms of renewals, season one has been picked up by Nick Jr. UK, YLE (Finland), TV Works (New Zealand) and ABC (Australia) with TV Works and ABC also renewing season two.

Ben and Holly’s Little Kingdom will continue to expand into Central and Eastern Europe in a deal that sees Dexy handle broadcast and DVD rights for the preschool animated show across Serbia, Bosnia, Montenegro and Macedonia. The series will also begin airing on RTE and in Welsh on S4C.

Further international broadcast sales include preschool series Tractor Tom, which will premiere in Gaelic on TG4 Ireland, Humf, which will re-launch on BBC Kids in Canada and join Ben and Holly’s Little Kingdom on Welsh channel S4C, and, lastly, the animated special Lost and Found has been acquired by Al Jazeera (Middle East), TPBS (Thailand) and RTSR (Switzerland).

eOne Family has also secured in-flight sales for Ben and Holly’s Little Kingdom and Tractor Tom. Episodes will be shown on flights with Emirates airline and Air Mauritius.

Naturally, the increased exposure of these shows will go to support the current licensing and merchandise activities for these brands.