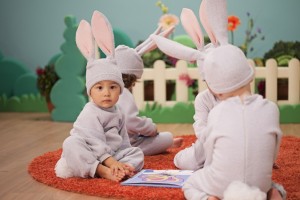 The 15 five-minute episode online series features kids under five years old playing in bunny suits in a daycare setting with Buddy Bunny and his puppet pals.

The series also gets Wagner back into a live studio after years shooting Comfy Couch, the US PBS series, and into a largely unscripted setting after more recently producing animation with Halifax Films.

“Working in animation, your scripting is very advanced to the production and locked in stone,” says Wagner. A live-action set for an online series, meanwhile, prizes spontaneity.

“This is such a different experience. It wasn¹t scripted. It was more documentary, putting the kids in a beautiful set and presenting them with toys and objects and having three cameras capture their movements,” Wagner says of the recent Bunny Bop! shoot ahead of a February 3 bow for the web series.

Also new to the Bunny Bop! producer are no speaking performers, just voice-overs written into the episodes after live action footage is captured and edited.

“It was very interesting to work with total freedom, with no broadcasters to give notes or concerns,” Wagner added.

Bunny Bop! is a pilot project between Wagner’s Periscope Pictures and the Independent Production Fund.

“Everyone is figuring out how to do this and pay everyone and yourself,” Wagner says.

The Comfy Couch producer knows Bunny Bop! as a preschool series has potential to spin-off ancillary revenues from plush dolls and bunny outfits and a potential live action touring show. There’s also an original series score and songs to be sold as MP3 product. Yet, as an online series, Bunny Bop! needs to find an audience on a shoe-string budget in a giant digital world.

“We’re still in the fledgling stage, finding our viewership. We’re a drop in the bucket,” Wagner says.

From her Prince Edward Island production base in Atlantic Canada, the veteran producer is also looking to create a local cottage industry for Bunny Bop! merchandise without having to sign up a major US partner, as was done with Comfy Couch.

Distribution is also a challenge for the online series. Wagner originally envisioned a walled garden for Bunny Bop! to protect its integrity with young viewers and their parents.Then the series debuted on YouTube on a dedicated BunnyBopTV channel, and on Facebook, and all without advertising.

“Everyone puts adds on everything. We haven’t gone that far,” Wagner says.

But she could, now that Periscope is re-editing an 11-minute pilot as a possible TV series.

“I haven’t started those conversations. There may be ads on the sites, or there may be a potential TV series,” Wagner adds, anticipating the next turn or two in her journey from traditional TV to a cross-platform digital world. “I love the alacrity of it. It’s the world we’re living in. It’s so much faster.”