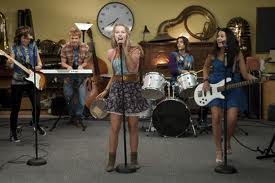 Tween-targeting original movie Lemonade Mouth is pulling in solid ratings for the House of Mouse.

Tween-targeting original movie Lemonade Mouth is pulling in solid ratings for the House of Mouse.

The movie’s premiere gained another 1.5 million total viewers via DVR playback (delivering 7.1 million viewers) and earned the spot as TV’s number-one movie of 2011 among youth ages six to 11 and nine to 15.

Additionally, a reported 54% of adults who watched the premiere telecast of Lemonade Mouth co-viewed with a six-to 14-year-old kid.

The musical-themed film is based on the book Lemonade Mouth by Mark Peter Hughes.