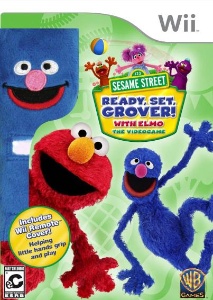 Sesame Street: Ready, Set, Grover!, developed by Griptonite Games, will be available for Wii and Nintendo DS this summer.

Accessibility for preschoolers is enhanced with Grover-themed gameplay helpers, available for Wii and Nintendo DS at no additional charge. On Wii, the gameplay helper is a plush character cover with special grips that slip over the Wii Remote. For Nintendo DS, there is a jumbo click stylus designed for smaller hands.