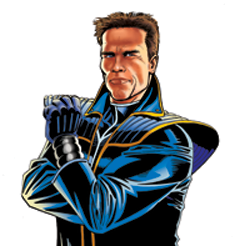 Banks’ credits include a six-year run as head writer for the international TV juggernaut SpongeBob Squarepants, and he previously wrote for Nickelodeon’s The Adventures of Jimmy Neutron: Boy Genius.

Banks is joining the project’s growing roster of industry experts, which include Stan Lee and Andy and Amy Heyward.  The Heyward’s A Squared Entertainment will produce The Governator TV series and 3D movie and will manage global licensing, merchandising and distribution.  Archie Comics will publish the comic series in print and digital forms under the new brand label Stan Lee Comics. Stan Lee, his producing partner Gill Champion, and POW! Entertainment will oversee all creative direction and story development.

The Governator, which was announced earlier this month during the MIPTV market in France, stars an animated Schwarzenegger after he has left his post as Governor of California. Schwarzenegger, along with three teenagers, decides to take on the global villainy and 21st century disasters that no one else is equipped to handle.