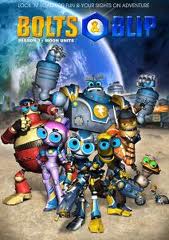 Nelvana and Nickelodeon pick up Bolts and Blip

Sales include a home entertainment deal with Nelvana and a broadcast deal with Nickelodeon on the Ananey Network in Israel, which is set to broadcast in July.

Aimed at kids ages seven to 11, the 26 x 22-minute stereoscopic 3D series follows the antics of Bolts & Blip – two misfit Civi-Bots. It has been previously sold to Canal +, ABC and Teletoon.