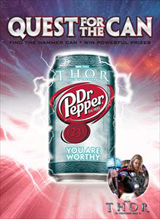 Dr Pepper and Marvel Studios are joining forces in the name of Thor for a new movie-inspired promotion.

Dr Pepper and Marvel Studios are joining forces in the name of Thor for a new movie-inspired promotion.

As a sponsor of the upcoming feature film, which hits theaters on May 6, Dr Pepper is launching a US-based Quest for the Can promotion that encourages fans to locate limited-edition Dr Pepper Hammer cans or caps.  Every code found on collectible Dr Pepper Hammer cans and caps is a winner and by registering on DrPepper.com, fans will receive a free one-month subscription to Marvel Digital Comics. A select number will also have the chance to win additional prizes, such as 3D televisions, airline gift cards, premium movie tickets or a year’s supply of Dr Pepper.