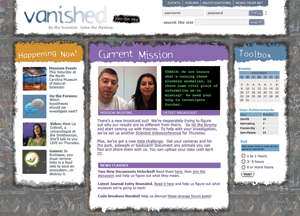 Tapping into kids' interest in series like CSI, the Smithsonian and MIT create a groundbreaking game.

With a grant from the US government’s National Science Foundation, renowned university the Massachusetts Insitute of Technology and The Smithsonian Institution have developed Vanished, a large-scale online/offline collaborative game that begins its eight-week pilot run this month.

“We are thinking of it as a ‘curatorial’ game,” says Scot Osterweil, creative director of MIT’s Education Arcade. “We really see the popularity of TV series like CSI and Bones as evidence that there is a hunger for this kind of problem-solving, and it’s not being met by the science taught in schools.”

The free game, aimed at an 11 to 14 demo, revolves around a website where participants log in and become investigators tasked with tracing the origins of an environmental disaster that may or may not be supernatural in nature. MIT professors and other experts are making themselves available online to assist participants in the course of their research, and more than 15 museums across the US will be linked into the game, offering exhibits and information to further the understanding of key topics.

“Kids will spend their time in three ways—at the museum, doing offline research and collaborating with other participants on our online forum,” says Osterweil.

Organizers are hoping to attract 25,000 kids to the initial program, with an outreach campaign promoting the website (vanished.mit.edu) through the museums and various media outlets.
Caitlin Feeley, project manager at MIT’s Education Arcade, says the game will be unlike other online or computer games because of the real-world applications and collaborative nature of the program.
“In this case, a participant isn’t taking on the role of a character—kids play as themselves and we present them with an elaborate puzzle that they have to solve over eight weeks,” she says. “In a way, it will be like [TV series] Lost in that there are a series of clues that reveal themselves gradually.”

Ultimately, adds Osterweil, the main goal of the program is to promote science education—a topic he feels has often been misunderstood by students. “We are trying to get kids to understand that the kinds of problem-solving that they do while they play games is actually exactly what scientist do,” he says. “Science isn’t about knowing a bunch of facts; it’s about problem-solving.”

While the game will wrap up in two months, Feeley says that the entire program was built using open-source code that will be made public once the game ends to allow other educational institutions to use the concept’s architecture. Additionally, she says there is potential for the program to be adapted for commercial interests. “We have already had some talks,” she says. “There is nothing to prevent a similar game of this scope being created using private funding with tie-ins to popular media in the future.”