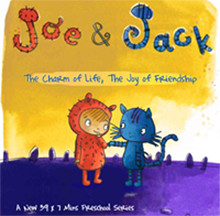 CCI to distribute Joe and Jack

Produced by Ireland’s Dancing Girl Productions, the first season of Joe and Jack has been greenlit to air on Ireland’s National Broadcaster RTE. The 39 x seven-minutes series will launch to the international market at next week’s MIPTV in Cannes, France and will be ready for delivery by summer 2012.

The series follows the comedic adventures of Joe and his best friend Jack, who happens to be a cat.