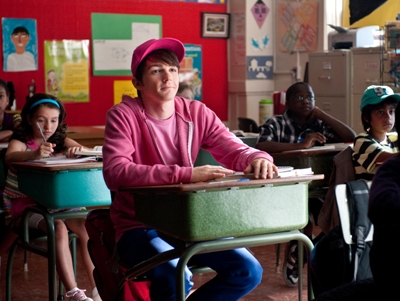 MTV brings its movies to MIPTV

MTV Networks International will be looking to stretch its global television movie portfolio in Cannes next month with three new TV movie titles up for grabs.

MTV Networks International will be looking to stretch its global television movie portfolio in Cannes next month with three new TV movie titles up for grabs.

First among the original titles is A Fairly Odd Movie: Grow Up, Timmy Turner!, the film adaptation of the animated series The Fairly Odd Parents. The movie combines live-action with CG animation to tell the story of a 23-year-old 5th grader who refuses to grow up. The movie stars Drake Bell (Drake & Josh), Jason Alexander (Seinfeld) and Cheryl Hines (Curb Your Enthusiasm).

Best Player, from the team behind Nickelodeon’s Spectacular!, will see iCarly’s Jennette McCurdy and Jerry Trainor star in a movie about online gaming.

Also taking on a new role is Victorious lead Victoria Justice in The Boy Who Cried Werewolf. Justice is headlining the werewolf-themed movie alongside Hollywood actress Brooke Shields.

MTVNI is heading to Cannes with two Canadian TV movie deals already in place with Vrak TV. The French language specialty channel recently picked up Gym Teacher, which follows the tribulations of a failed Olympic athlete, and Spectacular!, the story of a bad boy rock star who joins a show choir.