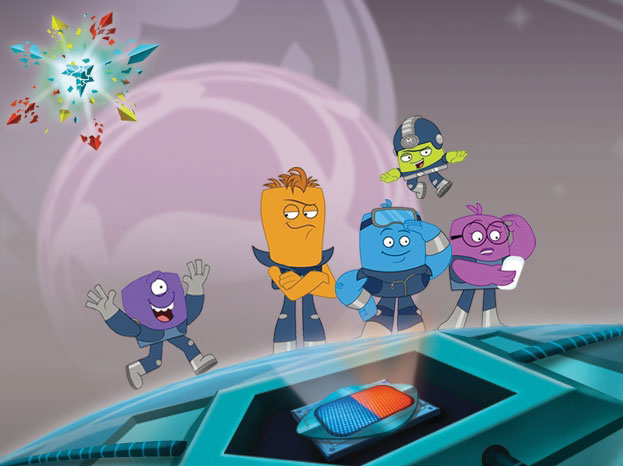 It looks like the guys behind CCI Entertainment’s new GeoFreakZ brand were paying attention during science class. The biological concept of mutualism—or reciprocal usefulness—is in full force in the new Canadian property, whose TV, online and live event components directly feed off one another.
Developed in partnership with Canadian kidnet Teletoon, Smiley Guy Studios and CCI’s digital team, GeoFreakZ consists of an MMOG that has an accompanying 44 animated minisodes slated to air on Teletoon this spring. And there are clues embedded within the minisodes that can be unlocked via the MMOG housed on Teletoon’s website. The thing uniting each medium is the concept of geocaching—the global real-life treasure hunt—that will also introduce a third live events component to the brand.
“Our objective was to build a true transmedia property that kids can enter into from many ways,” says CCI co-chairman Charles Falzon, adding that what makes the property so unique is its willingness to straddle—and develop—the varying entertainment outlets at once. “We’re not sure if the web game is going to end up driving traffic to the TV series, or if it will be the other way around,” he says.
What also remains undefined is the traction that geocaching will have with the brand’s tween target. CCI has formed a joint-venture with Seattle-based Groundspeak—the largest organized geocaching network with more than five million members globally—to attract a younger demo to the predominantly adult-driven pastime. Through Groundspeak’s Geocaching.com, additional clues to the MMOG will be delivered via handheld GPS devices, which Falzon and his co-chairman Arnie Zipursky believe are becoming increasingly popular among the cellphone-toting tween and teen demo.
With three major components to the brand, CCI intends to market each fragment through partnerships with outlets like Teletoon and other international broadcasters, live venues like public parks, and retailers that target younger consumers. The company is also looking to reach kids through viral marketing and social media efforts. CCI is currently in discussions with broadcasters and licensees worldwide about further expansion and intends to conduct a multiplatform release with a network TV partner and a promoter in each new market.